Ubiquitin Signals and their decoding 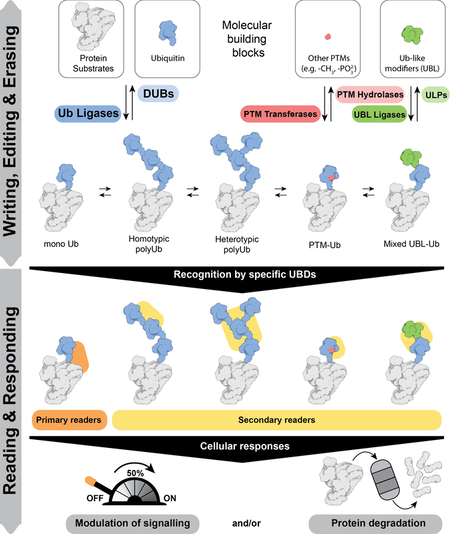 from our review Lange et al. Molecular Cell 2022
The functional outcome of ubiquitylation depends on whether ubiquitin is attached to substrate proteins as a monomer or as polyubiquitin chains. Thus substrates can be modified with different types of ubiquitin modifications: a single Ub on one substrate lysine (monoubiquitin), multiple  substrate lysines (multi-monoubiquitin) or polyubiquitin chains. Topologically distinct polyubiquitin chains of 8 different types can be assembled, as each of the 7 lysine residues (K6, K11, K27, K29, K33, K48 and K63) and an N terminal methionine (M1) in ubiquitin can serve as acceptors for another ubiquitin.
Proteins with ubiquitin binding domains (UBDs) make up the “reader” module and translate these different modifications into specific outcomes. Readers for some of the linkage types are yet to be discovered, thus limiting our understanding of how different linkage types are utilised. Mechanistically, it is fascinating that small UBDs such as NZFs, MIUs and UBA domains employ different strategies to discriminate the different types of ubiquitin signals, all of which are made up of the same building block - ubiquitin.
We therefore want to understand the nature of the ubiquitin signal produced and the principles by which different ubiquitin signals are decoded and integrated by UBD containing proteins that determines whether the ubiquitin modification signals destruction of the tagged protein. 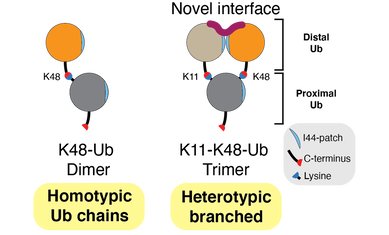 In addition to the 8 homotypic polyubiquitin chains described above, we and others have shown that polyubiquitin exists as heterotypic chains made up of branched and mixed linkages. Branched heterotypic Ub (HUb) chains are formed when multiple Ub molecules are attached to a single, proximal Ub via different linkages (see Figure). Heterotypic Ub chains have been reported to have specialized roles in cells including cell cycle progression, NF-kB transcription factor activation and degradation of aggregation-prone proteins that cause neurodegenerative diseases. Further, enzymes involved in the formation, or recognition, of branched HUb are mutated in neurodegenerative or neurodevelopmental disorders. It is estimated that 10-20% of all Ub polymers exist within branched structures. However, the lack of antibodies and facile approaches to study branched HUb chains has impeded our understanding of their cellular roles. Available evidence suggests that branched structures are formed in response to specific cues and cellular stress and may therefore function as a priority signal compared to homotypic chains to trigger an efficient and rapid response. To fully understand each branched HUb chain type, we need to understand how they are assembled by the Ub conjugating E2 and the Ub E3 ligase enzymes, how they are decoded by proteins with Ub binding domains (UBDs) and how they are disassembled by deubiquitinases (DUBs). In theory, branched chains could be formed by the addition of a second branching Ub on a template homotypic chain. Such branching would rely on E2/E3s recognizing the parental homotypic chain to add branches. Alternatively, these chains could be formed de novo by the concerted action of E2/E3s. In the branched HUb chain, juxtaposition of the distal Ub moieties could create novel and unique interaction interfaces that can be decoded by UBDs to translate these signals into efficient and precise responses (see Figure). As part of an ERC Consolidator Grant (StressHUb) awarded to the lab recently, we are pioneering the development of designer tools and methods, which we will combine with quantitative proteomics, protein engineering, single cell analyses, biochemistry and structural biology to investigate the mechanisms behind the important roles for branched heterotypic Ub chains in maintaining cellular homeostasis. 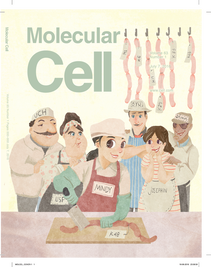 Deubiquitinases (DUBs) are “erasers” of ubiquitylation that remove ubiquitin from modified proteins to modulate the outcome of ubiquitylation. Given their key roles as regulators of ubiquitylation, there is growing interest to explore DUBs as therapeutic targets. Indeed many DUBs are deregulated in cancers and inflammation. However, the precise biological roles and identity of substrates of many DUBs is unknown. We are therefore interested in exploring their biological roles and defining how DUBs are targeted to their substrate.
The human genome encodes for around 100 DUBs that are classified into five different DUB families. Many of the DUBs are well studied and it has long been accepted that all DUBs are annotated. In 2016, we reported the surprising discovery of DUB activity in FAM63A, an unstudied protein with a domain of unknown function. Based on our analyses, we defined FAM63A to belong to a new family of DUBs that we named MINDY (MIU containing novel DUB family). The catalytic MINDY domain adopts a conformation that is distinct from other known DUBs and employs unique mechanisms to recognize and cleave long ubiquitin chains. We are studying how the other MINDY DUBs, MINDY3 and 4, recognize substrate and importantly, we want to understand the cell biology regulated by this poorly understood family of enzymes. 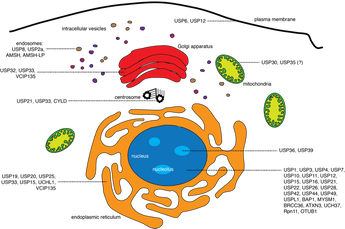 The discovery of the MINDY family of DUBs prompted us to explore if there are other DUBs yet to be identified. This led to the discovery of yet another novel class of DUBs when our approaches using activity-based probes and proteomics led to the identification of DUB activity in ZUP1. We showed in our paper that ZUP1 is highly specific at cleaving K63-linked polyubiquitin and is essential for maintaining genome integrity. Are there more DUBs still to be discovered?

An overarching question we want to answer is how DUBs are targeted to their substrates and how DUB activity is regulated to ensure that DUBs are only active at the right time and space.

Selected publications from the lab 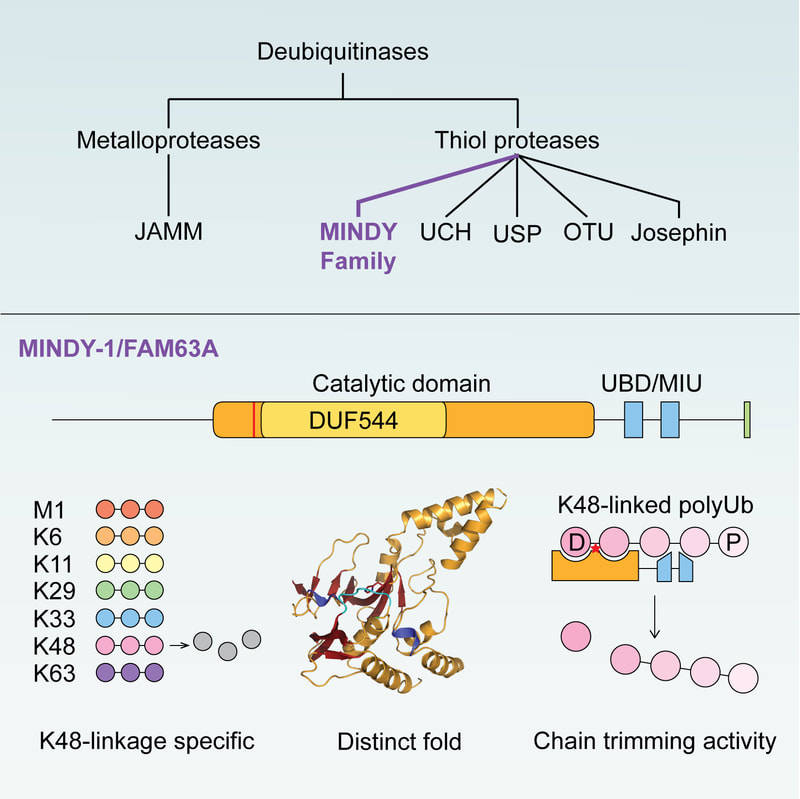 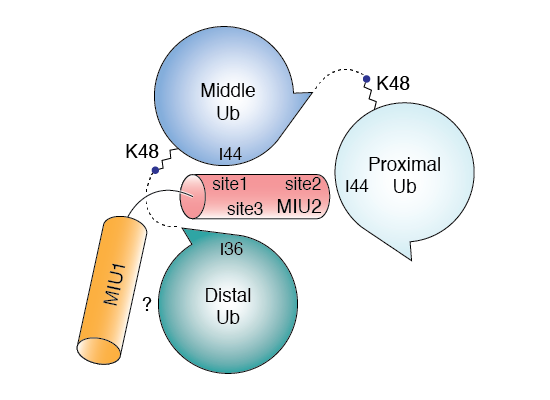 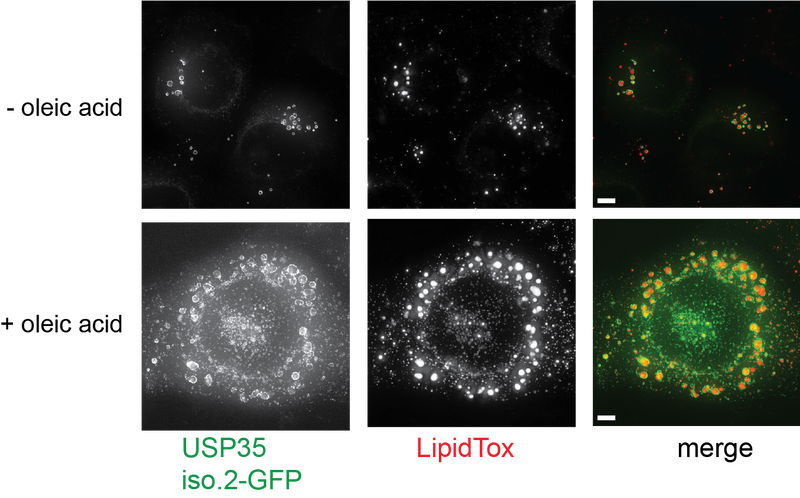 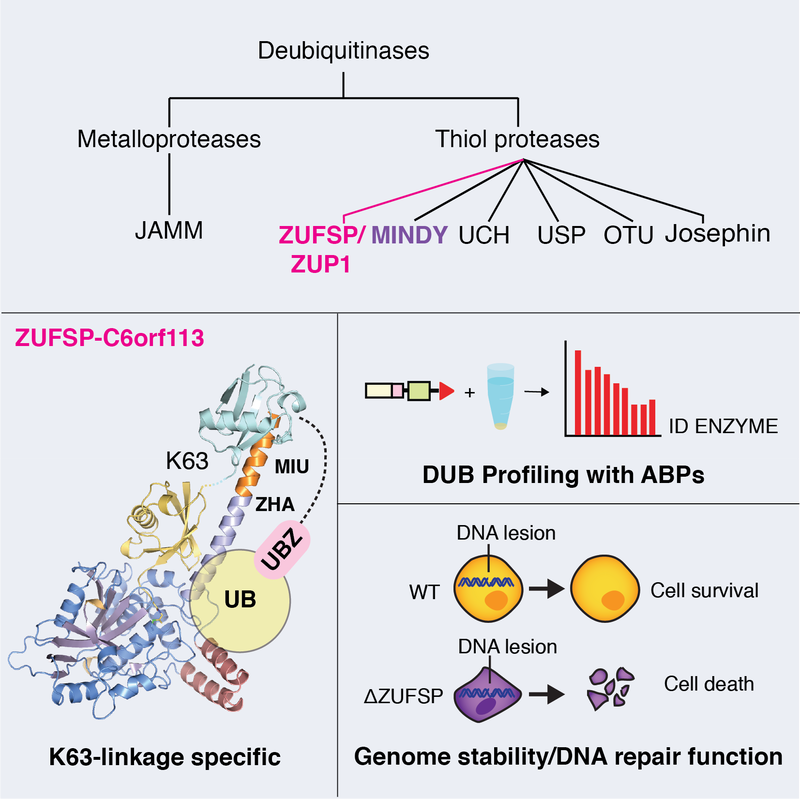 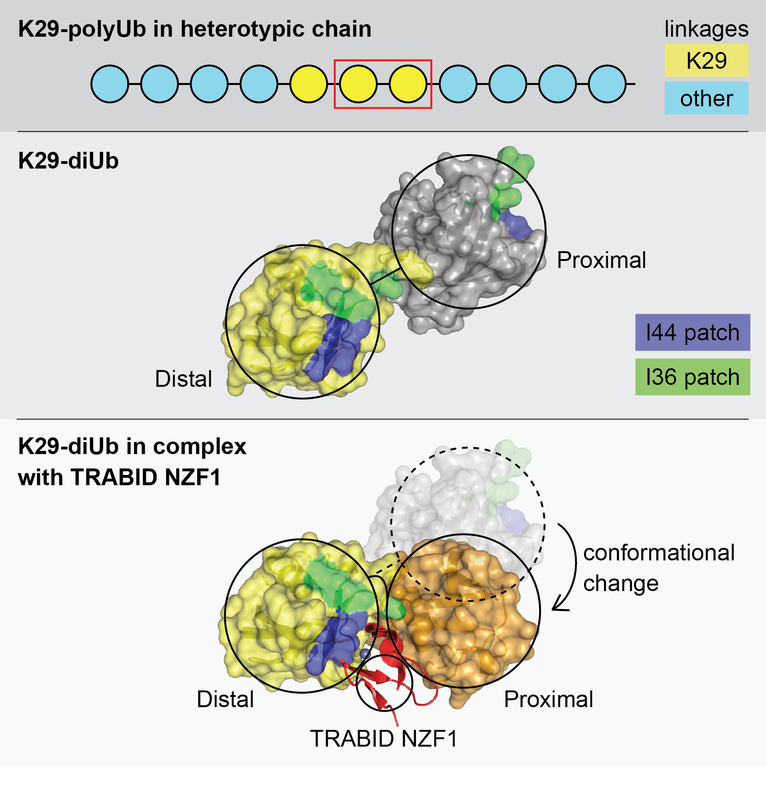